Back in 1970 I was unsure of the direction of my work and experimented with abstraction, free form, gestural figure drawings, mono-printing, etc. At the time, I was involved in the day to day operation of a small retail, wholesale, and manufacturing business and could only work on my art in my spare time. 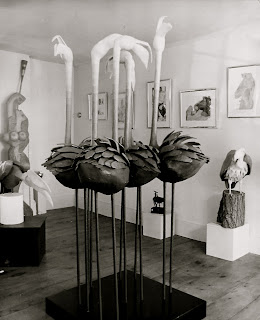 Some of my early gestural paintings hanging behind the bird sculptures of Wendy Seller, at the 91 Main St. Gallery in Rockport, MA

1970 was also the year the Museum of Fine Arts in Boston mounted a large Andrew Wyeth exhibition. I didn’t really know much about him or his work, having only seen reproductions of “Christina’s World” in books and magazines. That show changed that. I was was totally captivated by his work. I stood in front of many of the pieces nearly breathless. The drawings were astounding, the paintings amazing, and then I stood in front of “Snow Flurries” and my experience went into the spiritual or mystical realm. I was spellbound and speechless. I could barely pull myself away from that piece. 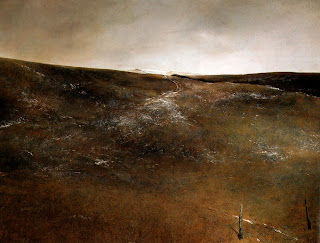 I revisited some of the drawings and other works that had impressed me, but kept going back to “Snow Flurries.” Standing at a distance, the painting is a realistic tour de force, moving closer it is a sublime abstract painting that Rothko would envy. Until that time, I hadn’t realized how a work of art could move one so emotionally. Since that time I’ve experienced it again only rarely, in the presence of a Vermeer or visiting the Van Gogh Museum, for example.

When I got home, I picked up my sketch book and pencils and headed to the harbor, where I did the drawing that set me on the path I’ve been following ever since. 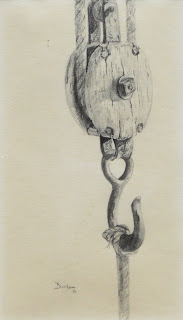 For the next 6 years I did nothing but draw, whenever I could find the time away from my other business. I wanted to hone my skill with the pencil before moving on to paint. Once I started to paint, I found myself much more comfortable with watercolor than with oil and that is what I do to this day.

Some 27 years later, I was stopping for lunch on a photography outing to Tennents Harbor and Port Clyde. I had just finished lunch and as I walked outside I noticed an SUV with PA plates. I recognized the person sitting in the passenger seat as Andrew Wyeth himself. My heart skipped a beat. Should I go up to the window and introduce myself? I was torn. I thought people must come up to him all the time, and I decided I didn’t want to bother him, so I walked on by. As I passed by the car, I realized it was a once in a lifetime opportunity that I shouldn’t pass up even if he was less than receptive. I walked back to the window and he opened it. I told him how much his work has meant to me and what an influence it was on my own work. He smiled and was most gracious. We chatted about art and people we knew in common, including Stow Wengenroth and the Beals, for about five minutes, until his driver returned. It was then that he introduced me to Helga.

In a future post I’ll tell you how I met Stow Wengenroth, the other major influence on my work. 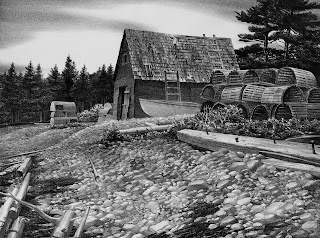