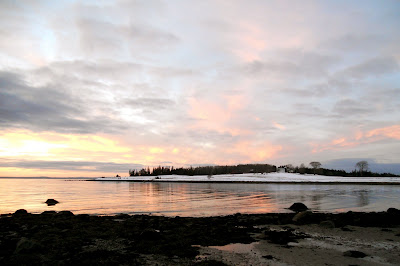 As the sun sets tonight, there is the promise of a new day and a new year. I wish you all a Happy & Healthy New Year and hope you enjoy this video of Scotland's gem, Eddi Reader singing the traditional end of year song "Auld Lang Syne". Be safe, fill your hearts with love, grow something this coming year, respect and nourish the soil and it will nourish you, reach out to someone in need and pray for peace.
Posted by Gregory Dunham at 10:48 AM 2 comments: 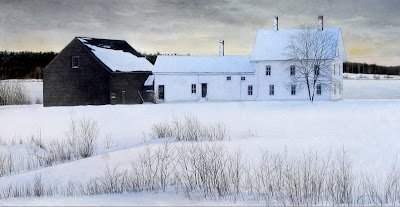 After the Storm, Christmas Day

Out on the river,

sounds are muffled as day begins,

Even birds are waiting

for the wind to stop,

anchored on a sea of white.

After the storm, the fields

are silent, no footprints yet.

Deer are resting among

islands of hedgerows and fence lines,

landmarks in a sea of white.

warmed by red oak and birch.

Down in the kitchen, coffee is on,

Christmas magic inside and out,

Though I in no way consider myself a poet, I was inspired to write the preceding poem to go along with the mood in my painting.

Merry Christmas and Happy New Year. May you experience the magic of love, the warmth of family & friends, peace both within and without, and a sense of joy, wonder, hope & fulfillment, as the season turns and the light slowly begins its return.

You can see a larger image of the above watercolor at my web site: Gregory Dunham Watercolors a Christmas Card

The Story of a Drawing and the Passing of Time: from the Real, to a Drawing, to the Real

The Story of a Drawing and a Knitted Hat 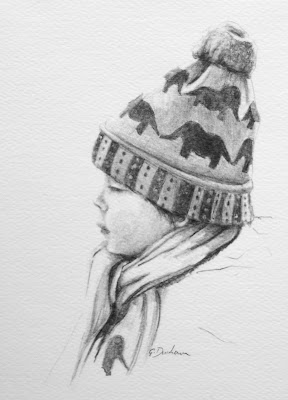 The Hat, 1976, Graphite Drawing by Gregory Dunham, Private Collection
Paris 1970
Nearly 41 years ago, on an extended stay in Paris during the winter of 1970, besides the outdoor produce markets, one of my favorite spots to visit was the Jardin du Luxembourg. I loved to watch the children sailing their pond boats, the kids on the carousel reaching for the ring with their sticks, old gentlemen playing boules, young mothers and nannies pushing strollers, lovers walking arm in arm and the many people on benches watching, reading or eating. They were all a wealth of material for future paintings. On one such excursion I noticed a young boy riding a pedal cart, wearing a knit cap and scarf with an elephant design. 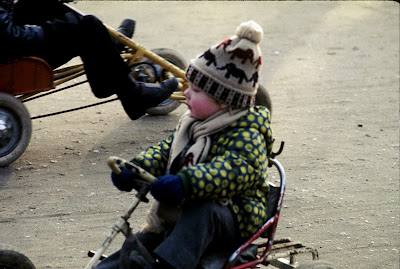 Little Boy in the Jardin du Luxembourg, Paris 1970, Gregory Dunham photograph
I took a photo of him and stored the memory away in my mind, till six years later, in 1976, when I did a graphite drawing and a watercolor of the little boy in his hat. Both the drawing and the watercolor sold from a show I had that year at the Guild of Boston Artists.
Now the most interesting part of the story begins. Ten years later in 1986, we learned we were about to have a son, whom we would name Stow after my friend and mentor Stow Wengenroth. Giving thought to a birth announcement, I suggested we use my drawing of the young boy from ten years earlier. Unfortunately, I had no photographic record of the drawing or the watercolor, but I was able to contact the buyer of the drawing and she agreed to let me borrow it back for the announcement. Sadly, I was unable to keep track of the collector who purchased the watercolor and as a result do not know its whereabouts.
As the story continues, two years later, after the arrival of our daughter Abby some friends held a baby shower for us. One of our friends had had a hat, similar to the one on the announcement, originally worn by the little boy in Paris, knit as a gift for Stow. When we placed it on his head we were struck by the resemblance to my drawing and to the Parisian boy from nineteen years earlier. 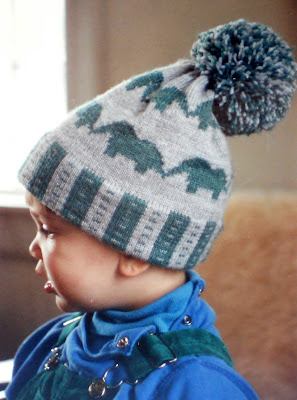 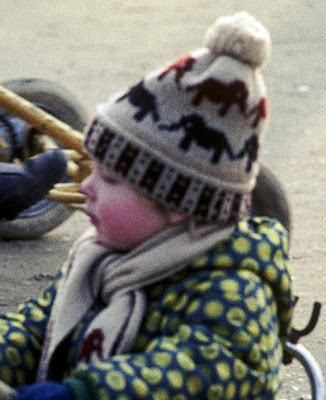 Detail: Little Boy in the Jardin du Luxembourg, Paris 1970, Gregory Dunham photograph
I'll end my story of the passage of time from the real, to a drawing, to the real here. Stow turned 24 this year. The drawing is 34 years old and the little Parisian boy is probably about 43 by now and for all I know may have a little boy of his own wearing a similar hat.
Posted by Gregory Dunham at 10:19 AM 4 comments: 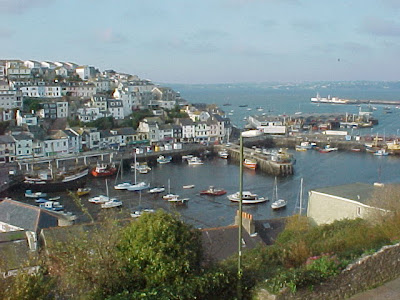 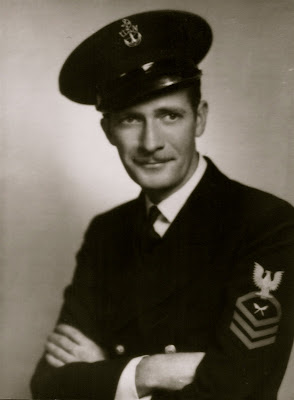 Corea Harbor, Maine - Graphite Drawing: When the Past Becomes a Ghost or Let's Keep Our Working Waterfronts - Working 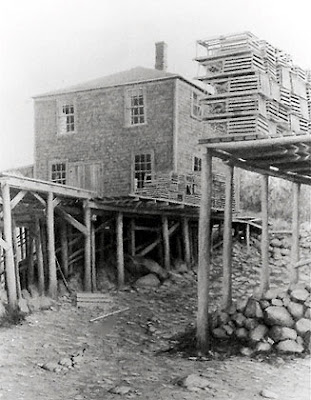 Corea Harbor, graphite, 15x22, 1982, Private Collection
I did the above drawing of Corea Harbor, Maine in 1982, years before the gentrification of the waterfront. It always puzzles me why people are attracted to an area by its rustic and picturesque beauty and then proceed to "improve" what attracted them in the first place. Maine is losing far too many of its harbor fronts to gentrification. Unfortunately, when I returned to this location, I was saddened to see, it is no longer worth a second look. It has been "improved" to all of our loss.
Posted by Gregory Dunham at 1:22 PM No comments:

My 2010 solo show opens with a reception at the Courthouse Gallery in Ellsworth on Thursday, July 29th from 5 - 7 pm. There is a catalog featuring some of my available work at the gallery or online: Courthouse Gallery 2010 Dunham Catalog 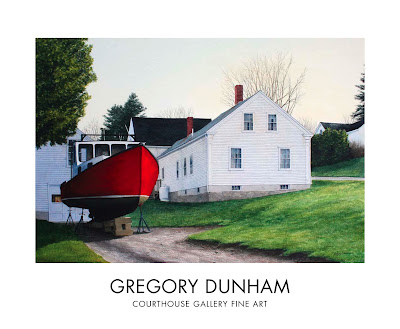 I will be showing my first five oil paintings added to my ongoing Granite Series watercolors. I will also have a small oil of the Bucksport waterfront, with beached lobster boats, railroad boxcars and the paper mill, and of course, many new watercolors. The show will run through August 25th.
Posted by Gregory Dunham at 8:02 AM No comments: 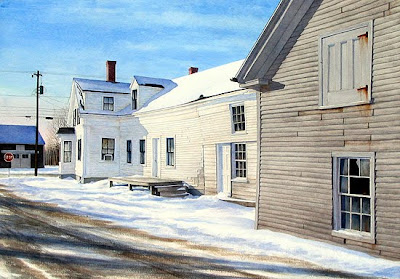 We just returned from a visit with Abby at Dartmouth. While there, she brought us to the Hood Museum to see a magnificent collection of 19th Century Hudson River School paintings on loan from a parent of a Dartmouth student, including among others, Thomas Cole’s Schroon Lake, 1835–38; John Frederick Kensett’s Landscape (Reminiscence of the White Mountains), 1852; Sanford Robinson Gifford’s Mount Mansfield, 1859; and Albert Bierstadt’s Haying, Conway Mountains (Peace and Plenty, North Conway, New Hampshire), 1864. You can read more about this exhibit by following this link: Private Collection Complements the American Paintings Collection at the Hood Museum
One of my favorite works on view is this little gem from the Hood's Permanent Collection, "Below Mt. Manadnock", oil on panel painted around 1913, by Abbott Handerson Thayer, (American, 1849-1921). 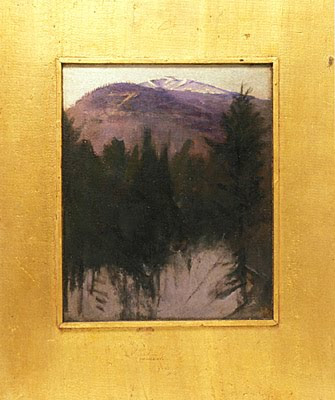 In this painting Thayer reverses earlier landscape tradition, by bringing the distant peak into focus and merely suggesting the middle and foreground by an almost calligraphic use of brush strokes. 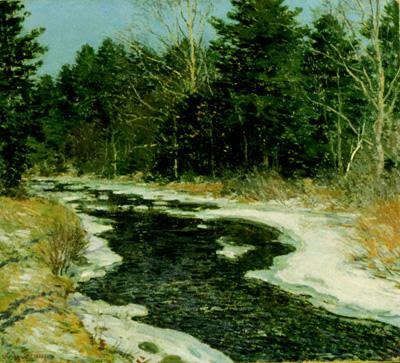 This Painting has a spontaneity and freshness of brushstroke with a wonderful glow of sparkling color that does not show as well in the photo as in person.

The exhibit will run through November of this year.

There is also an exhibit of Modern and Contemporary Art including a wonderful Rothko and a brilliant Sean Scully, that runs through March 14th. 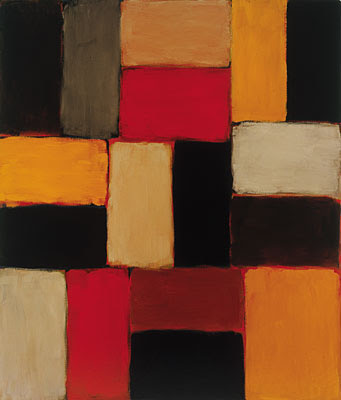 If you’re up that way, be sure to visit. Admission is free at the Hood Museum.

Posted by Gregory Dunham at 6:05 AM 3 comments: