Two Teachers, A Wyeth Painting and A Partial History of an Antique Cape 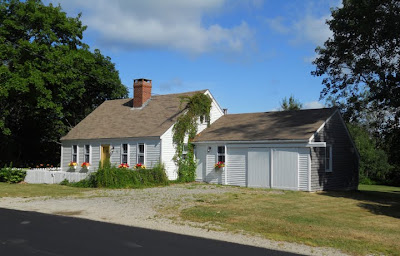 This was the house of Alan and Martha Ferguson who were neighbors of ours when we first moved to Castine. They were both artists and retired teachers from Stow, MA. Martha did pastel landscapes and Alan had settled comfortably into making humorous cartoons that focused on the doings and absurdities around town for the local paper.

What follows is a story they once told us, as I remember it:

Shortly after graduating from art school they were walking up Newbury St. in Boston when a painting in a gallery window caught their eye. They went inside to get a closer look and inquire about the artist. They were told it was by an up and coming artist, Andrew Wyeth, whose father was the famous N. C. Wyeth. It was one of Andrew’s early watercolors and they fell in love with it. They decided to splurge and pay the few hundred dollars, even though they were living on the meager salaries teachers received at that time.

For years they lived with and enjoyed the painting, but as Wyeth’s reputation grew and his works increased in value, they felt that perhaps they were being selfish by keeping the painting to themselves and that more people should be able to see it. They decided the best way to do that was to loan it to the MFA, which was only too happy to accept the loan. They both felt very pleased that the painting that gave them so much pleasure could now be seen and enjoyed by others as well.

Then one fateful day, years later, they went to the museum to visit with their painting and couldn’t find it. When they inquired about it, they learned that it was in storage. Well, this wasn’t the idea. They had loaned it to be seen not stored, so they asked to have it returned to them.

Now they had another dilemma. When they visited the gallery where they had originally purchased it, and learned what its value had become, it made them even more uncomfortable. They felt it was absurd to have such a valuable piece of art, uninsured and vulnerable to theft or damage, so they reluctantly arranged to have the gallery sell it. What the sale of that painting enabled them to do, was to buy the lovely antique cape pictured above, where they could spend their summers and in which they would live out their lives after retirement and enjoy wonderful sunsets like that pictured below. A nice story about two lovely neighbors who are sadly missed and what can happen when you invest in art. 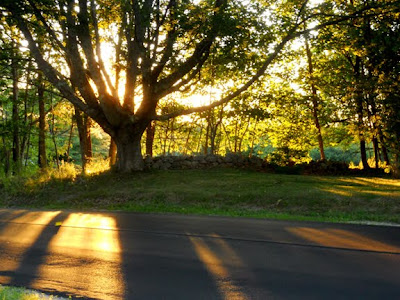 Posted by Gregory Dunham at 9:18 AM No comments: