Introducing the Drawings of Susan A. Cooney

In this post I’m going to take the opportunity to introduce you to one of Maine’s hidden gems, Susan A. Cooney and her exquisite graphite drawings. I found her and her drawings in a visit to her small Belfast studio, during the December First Friday Art Walk. As you will see, exquisite aptly describes her delicate and sensitively drawn work.

She lives on a boat and so works in graphite for its portability and out of necessity in such a confined space, but the drawings belie the necessity of space and show a true love and mastery of the medium. 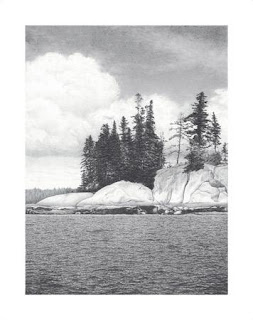 "Grog Island", Stonington, ME, Graphite Drawing, Susan A. Cooney
One wall in her Belfast studio contains a large map, where pushpins indicate all the places along the Maine coast and islands she has visited on her boat and her drawings document these places in all their many moods. I’ve provided a friends link to the right, where you can see more of her wonderful work at the Island Institute. 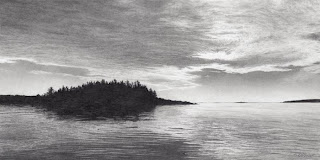 In other news, I'm the featured artist of the month at the Woodstock Gallery. Maybe it's time to go skiing and buy art.

Posted by Gregory Dunham at 10:43 AM No comments:

I'm pleased to announce that the Woodstock Gallery has begun representing my work in Woodstock, VT. 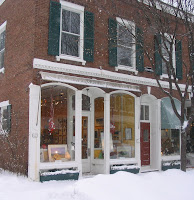 Pat and I delivered 10 paintings to the gallery on Wednesday in the midst of a major snowstorm, but all arrived safely, despite driving through unplowed roads and whiteouts. It was an exciting trip to say the least. Woodstock is a beautiful little town with lots of interesting shops and plenty of skiing nearby. One of the new paintings is shown below. It is of a picturesque farm with a bright red barn snuggled at the base of a mountain in Pomfret, a town bordering Woodstock. 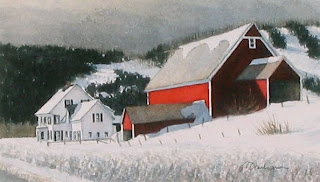 I will be showing two watercolors at the Holiday Gala at The Belfast Framer. Featuring a variety of works by area artists, December 3rd through December 31st.. A reception to meet the artists will be held on Friday, December 4th from 5:00 to 8:00 pm.

The Belfast Framer & Gallery is located at 96 Main Street, Belfast.

For more information, please call 338-6465 or visit The Belfast Framer.

I will also be exhibiting 4 small watercolors at the Tarratine Gallery Holliday Show, 5 Main St., Castine, ME

The opening day is Saturday the 5th of December as part of the Castine Merchants’ Holiday Season, including special refreshments that day and a wine reception from 5-7 PM. The show will run through December on Saturdays and Sundays: December 5,6,12, 13, 19, 20. Open hours will be from 10 AM until 4 PM. I hope to see you there.

Posted by Gregory Dunham at 6:40 AM No comments: 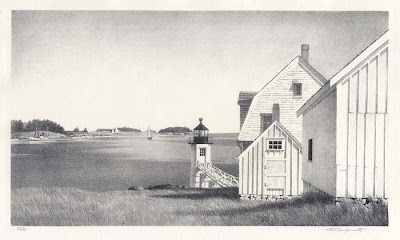 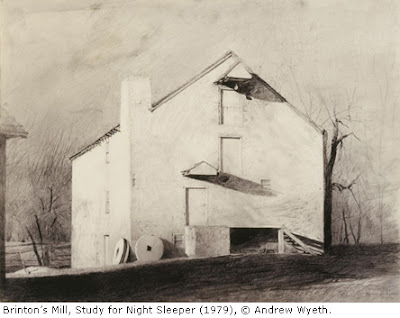 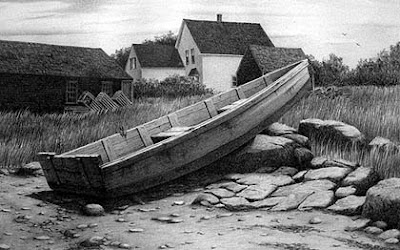 Below are two photos from the opening reception of the "Painters of the Maine Waterfront" show at the Penobscot Marine Museum on September 17th. 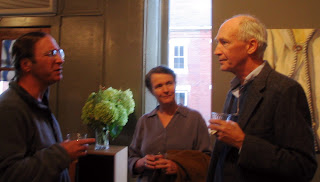 Pictured left to right are artists Robert Pollien, Amy Pollien and myself. 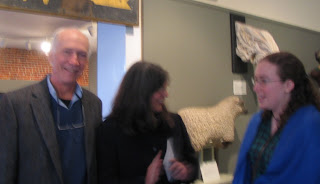 Pictured left to right, myself, artist Nancy Morgan Barnes, Abby Dunham (Dartmouth '11)
The photos are a bit blurry due to low light and no tripod. The exhibition ends on the 20th of October. If you haven't seen it yet, it's worth the trip to Searsport.
Posted by Gregory Dunham at 11:38 AM No comments:

I just learned that my painting “Fish Beach, Monhegan” has received The Reine Rose Strisik Popular Prize ... awarded by popular vote of visitors to the 3rd Summer Show of the Rockport Art Association. This award is in addition to the “John F. & Margaret Kieran Award for Landscape Painting” already announced for this painting by the awards jury. This painting will be on view at the Penobscot Marine Museum exhibition “Painting the Maine Waterfront” curated by Carl Little September 15 - October 20th and is pictured below.

Posted by Gregory Dunham at 6:42 PM No comments: 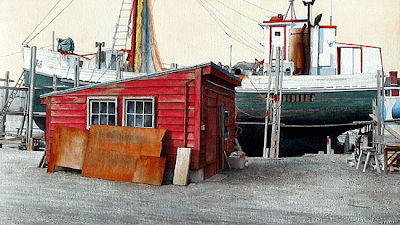 Posted by Gregory Dunham at 12:19 PM No comments:

Welcome! (CÉAD MÍLE FÁILTE)
This is my first blog post. I'm a Contemporary Realist working primarily in watercolor. I gather subject matter from all over Maine and New England with a particular fondness for Monhegan Island and working harbors, wherever they're still found. Trips to Cornwall & Devon, UK and more recently to Ireland were inspiring and provided plenty of amazing subjects. The painting pictured here is the first watercolor from a recent trip to Ireland, "Walking the Claddagh Quay, Galway". The Claddagh was formerly a fishing village, just outside the city walls and thought to be one of the oldest fishing ports in Ireland. The boat in the painting is called a Galway Hooker. This painting was included in a recent exhibition: "Maine Artists and the Figure" held at the Courthouse Gallery in Ellsworth, ME. and has been sold.
Please feel free to leave a comment and let me know what you think. If you are interested in any of the paintings shown here, most are for sale, either through the galleries that represent me or directly from my studio. Thanks for visiting.
Posted by Gregory Dunham at 10:10 AM 2 comments: