The Beauty of Rust and Decay on the BML Railroad

When I first moved to Maine in 1987, Belfast had an operating railroad. The Belfast and Moosehead Lake Railroad shared the waterfront with a small boatyard and several other small businesses. It had an engine house and a turntable, part of which is visible in the following image. 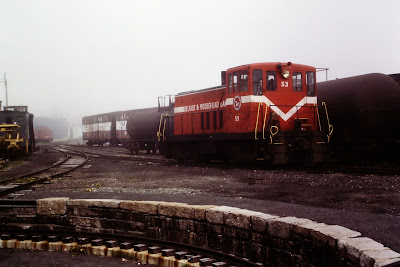 There was a cannery and a coal company, but by the time I got there the large chicken processing businesses that had dominated Belfast had already ceased operation. I used to love wandering around the waterfront and train yard looking for interesting shots and maybe future paintings. The following shot was taken in 1989. Notice the painted white X with the curved line or drip. 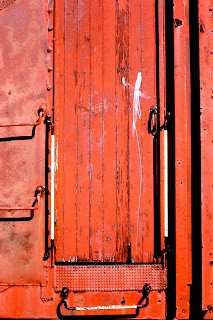 The BML, eventually ceased freight operations and for many years ran scenic tourist rides. Recently, Pat told me, what was left of the railroad and equipment was for sale, so I decided to go take some photos of what remained. What had been the dominant feature of the waterfront has been supplanted by a huge boatyard and yacht storage facility, but the remaining equipment is stored out at the station on Head of the Tide Rd. I found a wealth of decaying and neglected equipment and I took many shots. The following image is one, shot in 2013, just last week. Notice the curving white line near the left edge? 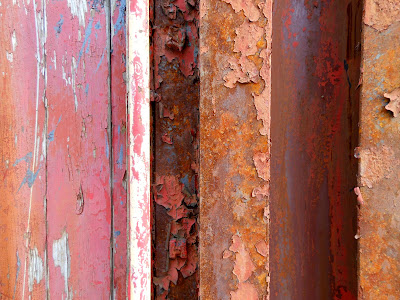 When I saw that white line in the recent photo, it struck a chord and I searched through my old slides and found the image of the red door above that had been taken in 1989. I enlarged the area in question 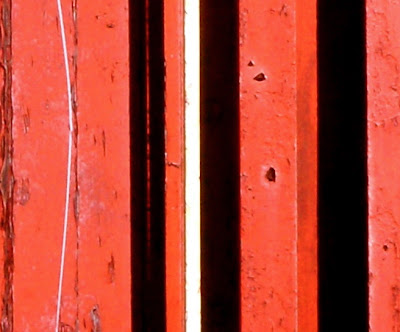 and sure enough...it is the very same image taken 24 years apart. The ravages of time and whether have created a beautiful image of rust and decay. I'll leave it to you to decide if the rust and peeling paint is an improvement or not, but combined as a side by side diptych, I think it makes a beautiful image.

Thanks for reading and I'll try to be more active with my blogging in the future.
Posted by Gregory Dunham at 7:26 AM